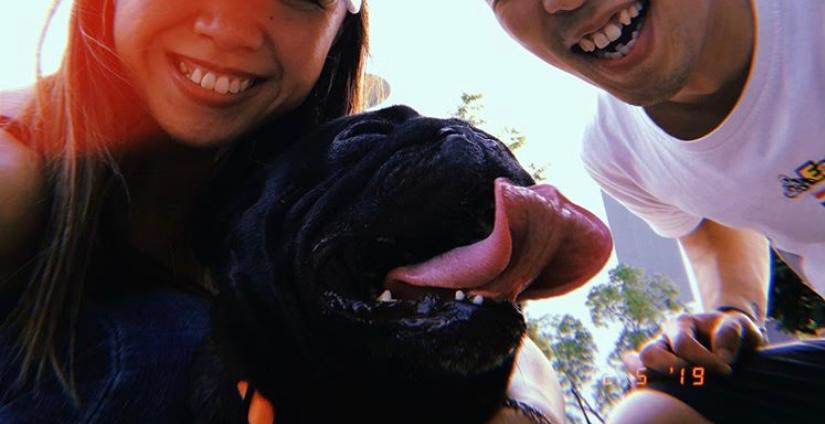 Nigel Chan and her husband said that if one of them managed to get a job in the UK then they would move immediately. They arrived at Manchester airport on Leave Outside the Rules (LOTR) in early October. They are now working on bringing their pug Bagel to the UK soon. She shares with Ying Goi Dim readers their experience in finding a job and a place to live from Hong Kong via Facebook.

How did your husband find a job before he even applied for the BNO visa or arrived in the UK? ⦁ 點可以喺未嚟到英國及未申請BNO簽證前搵到工

It’s all about explaining our situation in the cover letter to potential employers. In his job applications, he stated he is eligible for the BNO visa, which allows him to work, when application opens.

He is a technician and has years of experience in repairing mobile phones. This skill turns out to be still in high demand despite COVID-19. He looked for “phone repair” and “phone technician” jobs on Indeed, but large companies who replied all told him to apply after he landed in the UK.

So I suggested him to look at Facebook Jobs. There was some good feedback, including a reply via Facebook Messenger from the people who become his employer.

The employer responded to his job application and wanted to learn more about his situation. My husband explained that he is able to work either arriving with LOTR or a BNO visa. After a phone interview he got a verbal job offer. Yes, it felt very risky and there was no contract signed before we took off, but we decided to go for it.

I myself was a yoga teacher back in Hong Kong. I would like to teach here but I need to brush up my English first. I can understand English, but conversing is something I need to work on.

You are staying in a hotel now. Have you found a rental place yet? ⦁ 你剛到埗就住酒店，而家租到樓未

Yep, all thanks to Facebook! On Facebook Marketplace, one of the categories is “property for rent”. Back in HK we found a property in Nottingham that we like, and I started talking to the landlord and arranged a viewing for when we landed.

Being able to speak to the landlord directly allows for more flexibility. We are paying one month’ rent upfront only and are able to rent this place on a six-month lease. With a pet deposit we will be able to live here with Bagel when he arrives.

Which airline did you pick? ⦁ 坐邊間航空公司過嚟

We bought return tickets with Turkish Airlines for HK$3000 something per person originally. But fearing we need to do 14 days of self quarantine on arrival from Turkey, we bought new tickets from Finnair for around $6000 return per person, changing in Finland.

Finally… Why are you called Nigel?  ⦁  最後…點解你係女仔但係叫Nigel

I never had an English name when I was growing up. Years ago my friends suggested that I get one and I thought Nigel sounds like a girl’s name so I adopted it. Since coming to the UK my husband and I have been assumed to be a gay couple quite a few times. I may keep this name though, why not?

« What you need to fly back to Hong Kong ⦁ 疫情下飛番香港要注意嘅事項